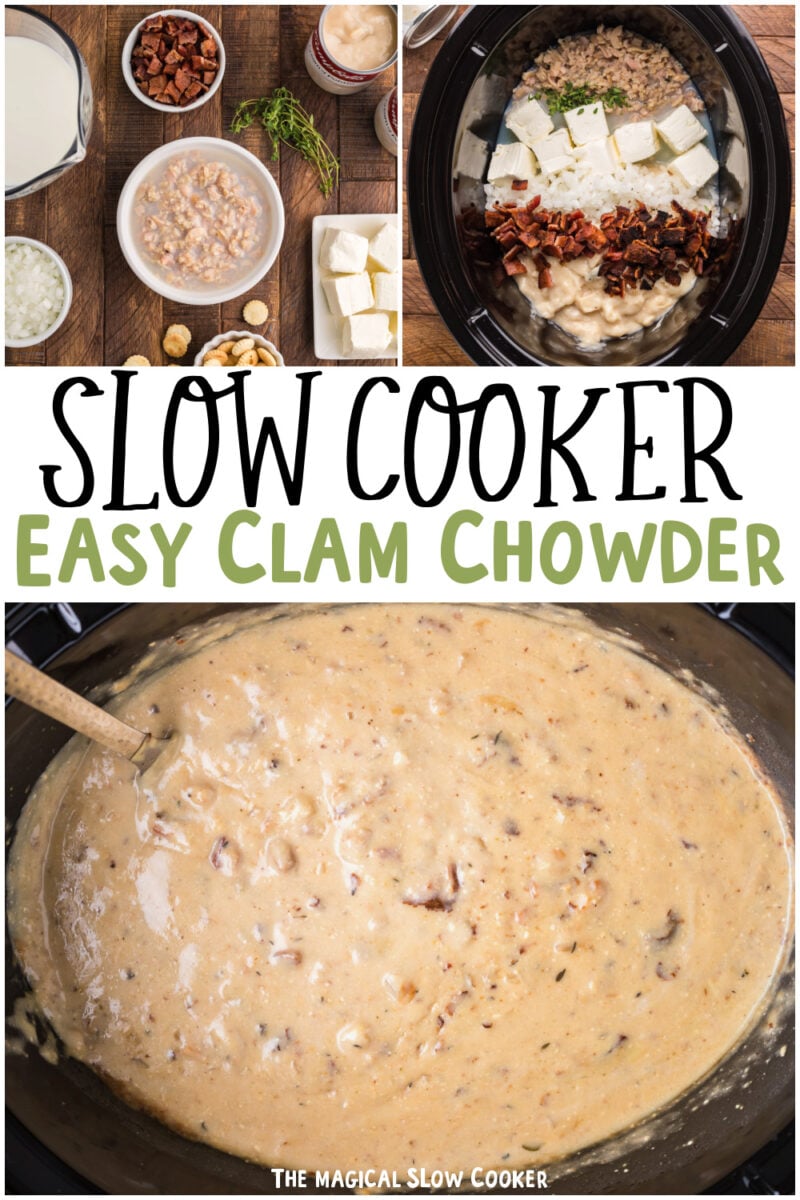 Creamy clam chowder with simple ingredients and very little prep. This recipe tastes so good, and the slow cooker does all the work for you, leaving plenty of time to do other things.

This is one of my favorite recipes to take on vacations. I also make ravioli lasagna and pulled pork when we are traveling, and I can bring my slow cooker.

What is the difference betwwen Manhattan and New England Clam Chowder.

How to make clam chowder in a slow cooker

This easy crockpot recipe is a godsend- just throw in your ingredients in the cooker and let it do all of the work for you.

Can I use an instant pot instead?

Instant Pot slow cooker clam chowder is also an excellent choice if you’re in a hurry, but I find that the flavors don’t melt together the same way they do if you use the crockpot to cook your New England clam chowder.

Do I add the clam juice from the can to clam chowder?

If you want a strong clam flavor, do add some of the juice. I would add about a half-cup. If you add too much, the clam chowder may become thin.

How long does clam chowder last in the fridge.

Since clams have a short shelf life, do not store it longer than 3 days to be on the safe side.

Can I freeze clam chowder?

Cream and potaotes do no freeze well, so it’s better to refrigerate and eat within a few days.

Do I have to add the bacon to clam chowder?

No! The bacon can be omitted if needed for lent; this chowder still has plenty of flavor without it.

How do you make your slow cooker? Do you add any extra ingredients to the recipe? Share in the comments below or on our social media pages!

Should I add the clam juice to my clam chowder? If you love a strong clam flavor in your clam chowder, yes! Adding clam juice is okay to do and will give your chowder a great clam flavor. Only add about a half cup for it can make the chowder too thin if too much is added. Can I omit the bacon for lent? Yes, this chowder has plenty of flavor without the bacon. How to do I store clam chowder? Store in the fridge for up to three days. Clam chowder doesn’t freeze well with for cream and potatoes aren’t the best after freezing.