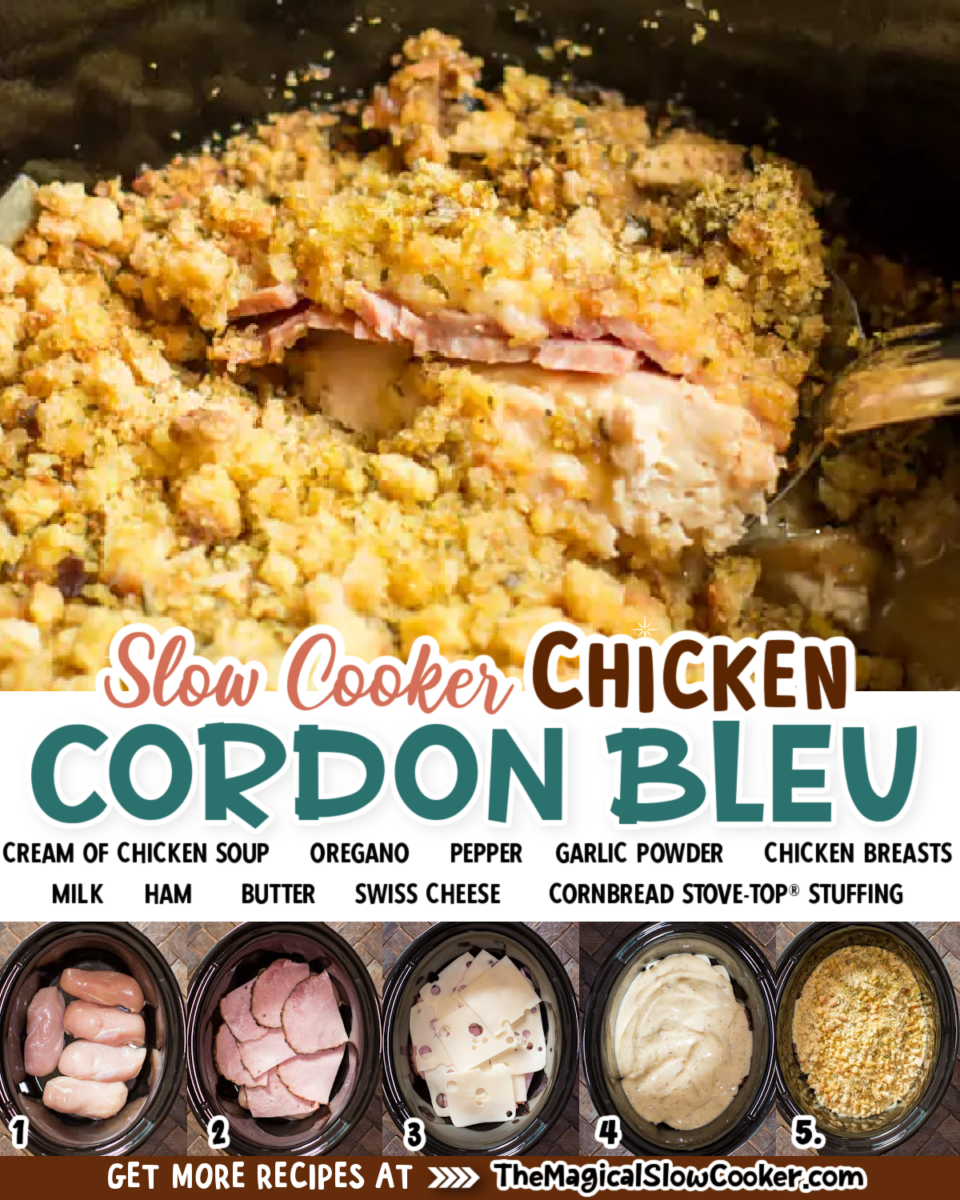 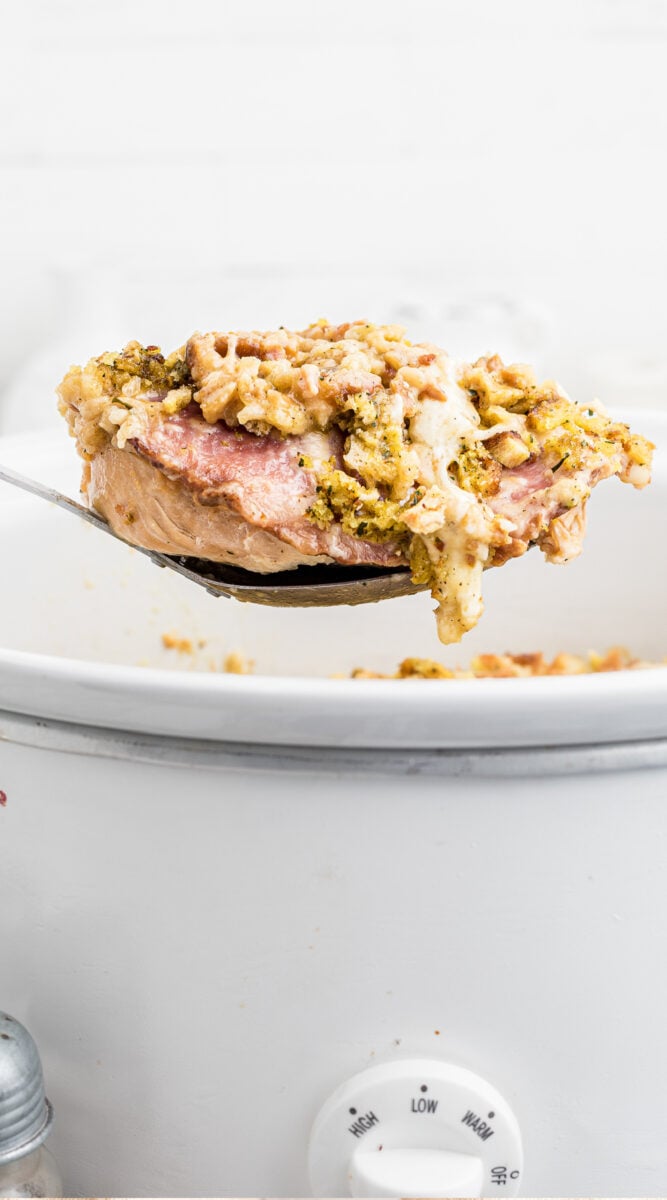 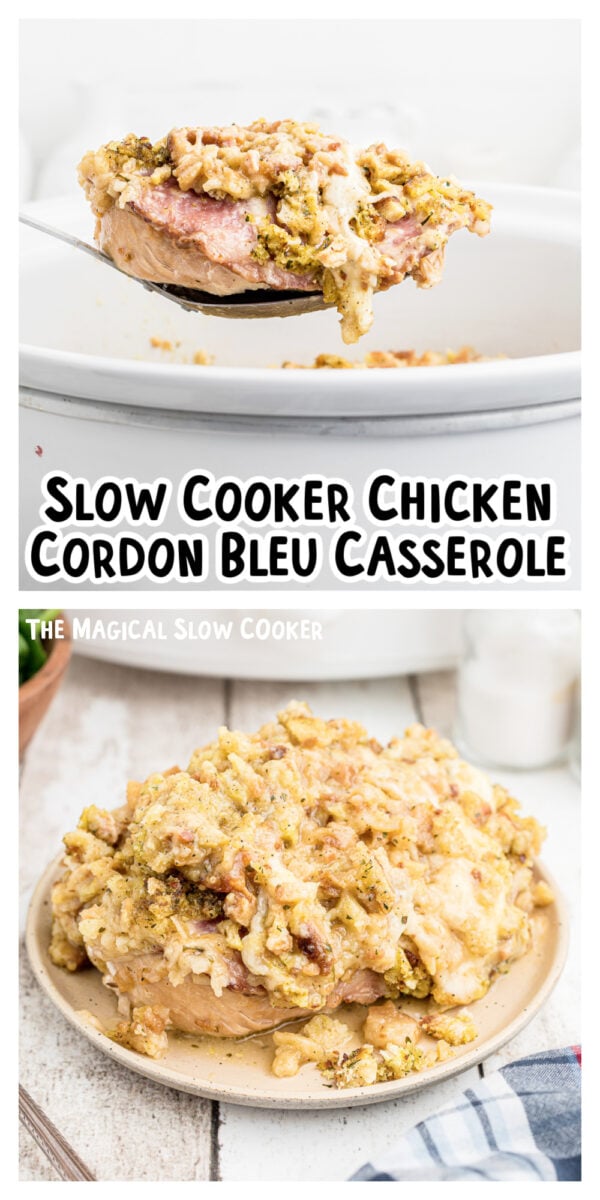 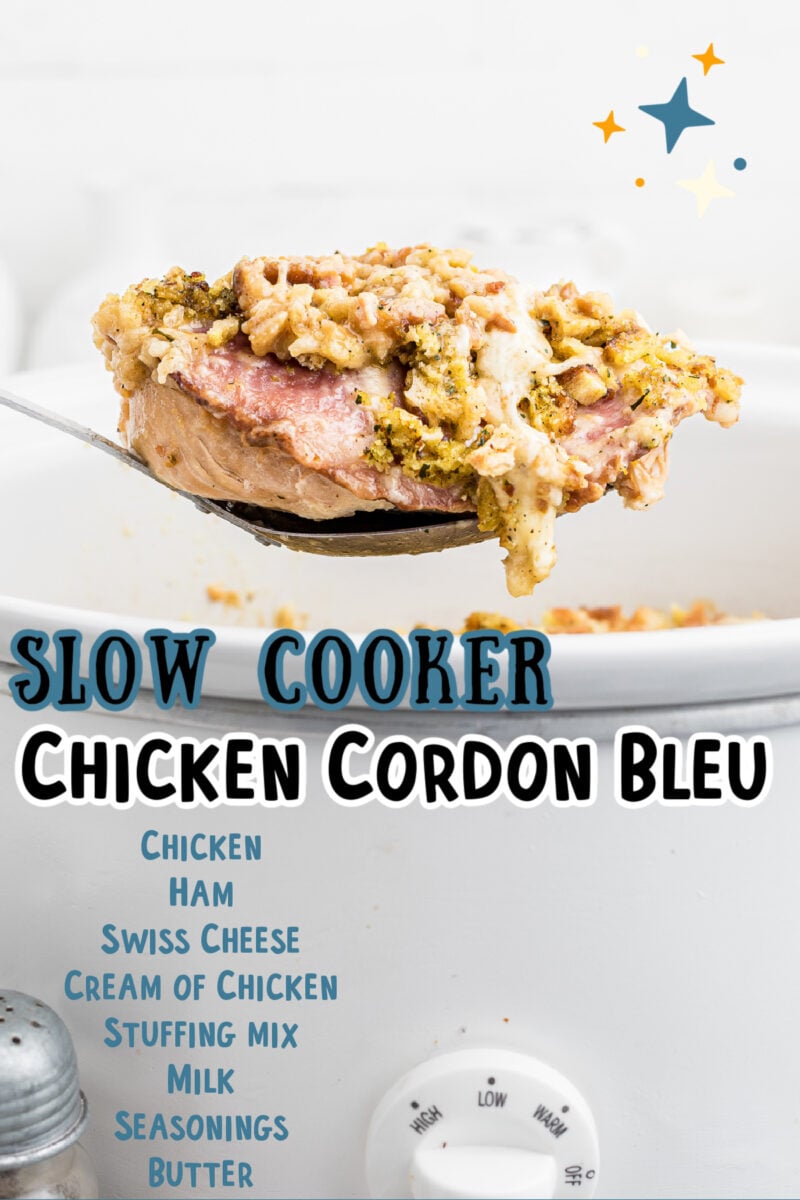 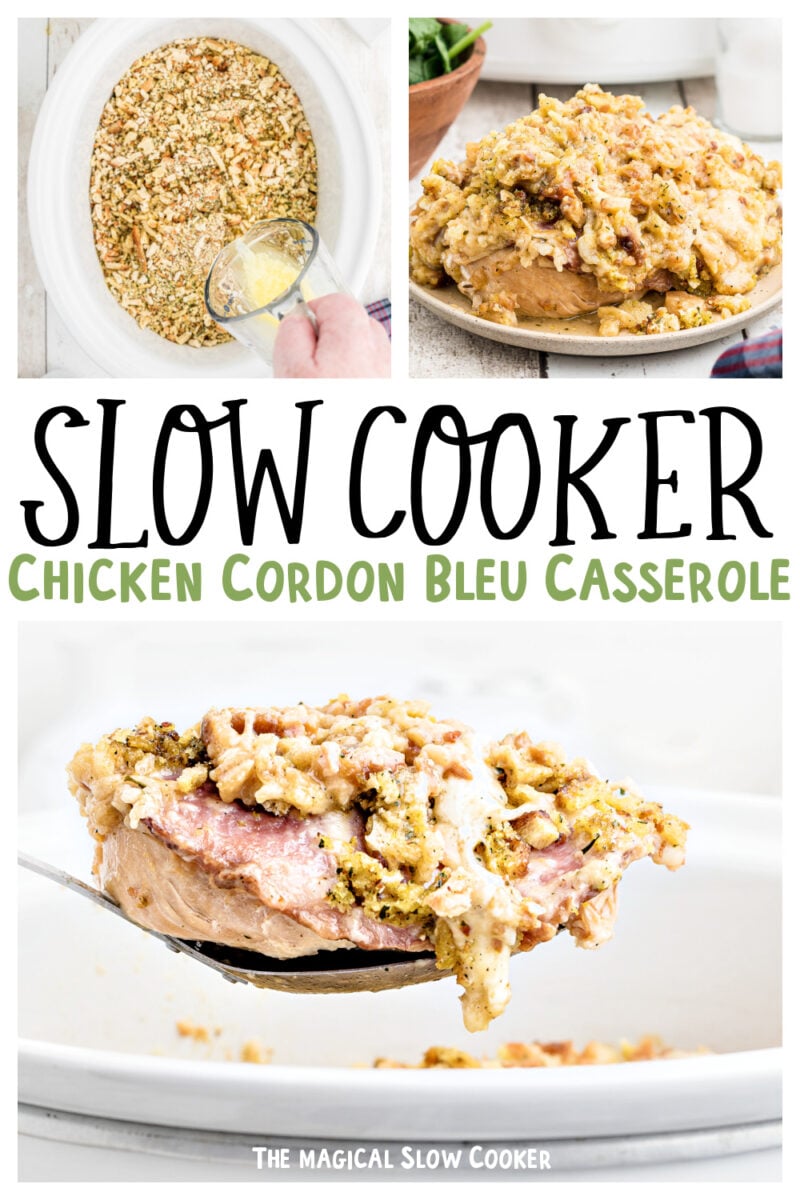 One of my childhood favorites made easily in the slow cooker. This Slow Cooker Chicken Cordon Bleu Casserole is so simple to make! It’s a layered casserole with chicken breasts, ham, swiss cheese, sauce, and stuffing.

Did you grow up on frozen chicken cordon blue chicken breasts? I haven’t bought them in ages, but I remember how much I loved the flavor combination. I’ve made homemade oven chicken cordon bleu breasts, but they are very time-consuming.

This Crock Pot Chicken Cordon Bleu Casserole can be loaded in the slow cooker within two shakes of a lamb’s tail. This is a layered dish and only needs 5 hours on low in the crockpot. I use cornbread stuffing mix for this recipe; the chicken would work fine instead.

Step One – Mix the condensed cream of chicken soup, milk, and seasonings. Set aside.

Step Two – Place the chicken breast down into your crock pot.

Step Three – Layer the ham over the chicken.

Step Five – Pour the soup mixture over the layers you made and spread out with a spatula.

Step Six – Sprinkle over the dry stuffing mix and drizzle over the melted butter.

Can I use frozen chicken breasts?

No, use fully thawed chicken breasts for the best results.

Can fully cooked chicken be used?

Why is my chicken still pink?

Something happens while the chicken and the ham cook next together, where the pinkness from the ham transfers to the chicken. If your chicken temperature is 165 degrees Fahrenheit, it’s done cooking.

How can I cut back on sodium?

There are a few things you can do to cut the salt content. Use healthy request cream of chicken soup, low sodium ham, and unsalted butter. 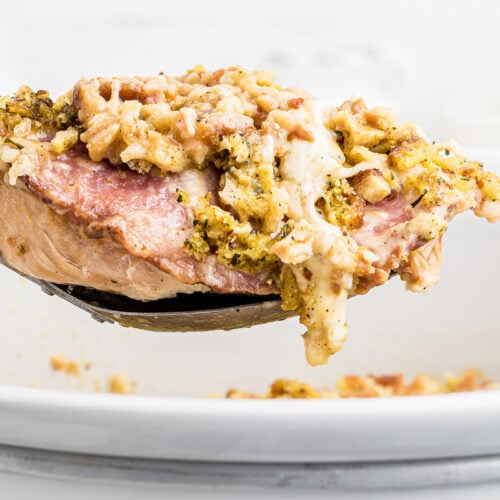 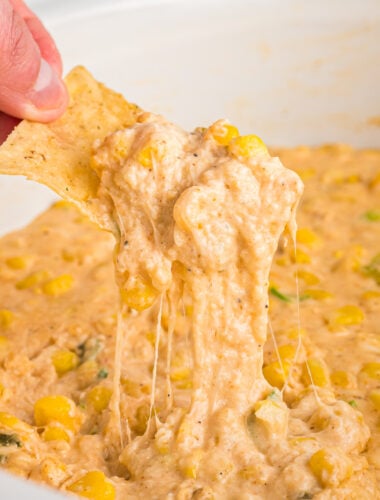 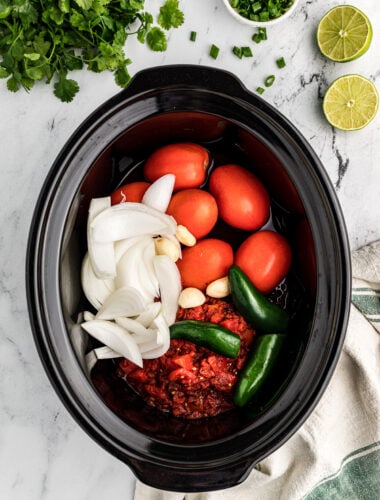 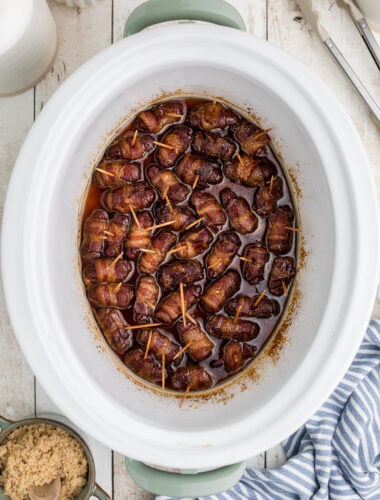 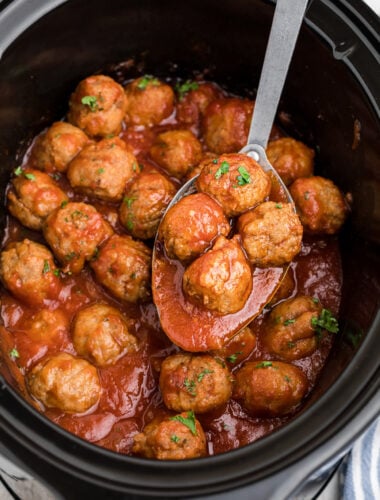 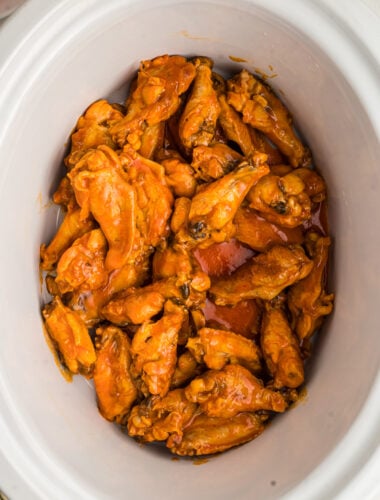 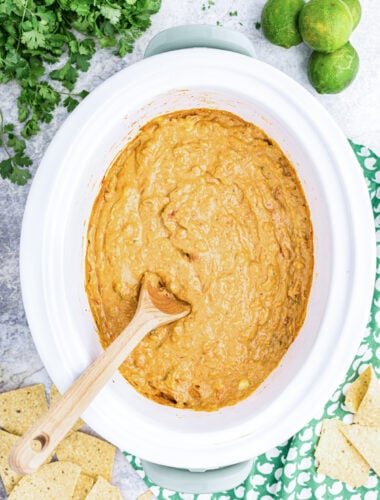